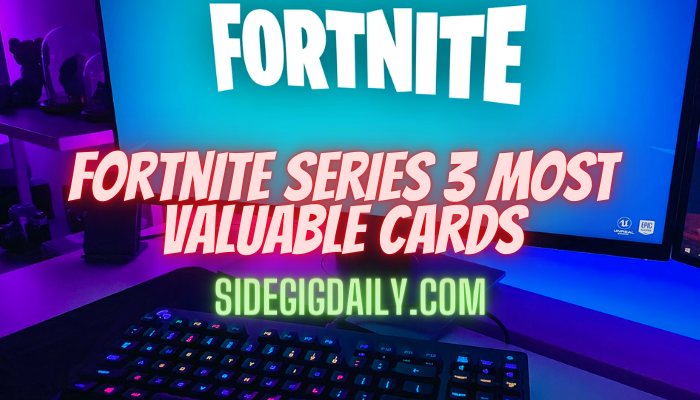 Specific Fortnite Series 3 trading cards have jumped in value and will continue to increase over the years.

Panini Fortnite Series 3 trading cards are predicted to be in high demand among card collectors and Fortnite enthusiasts. There are a total of 332 cards to collect and some feature new designs like double-sided wraps.

Some of these Series 3 Fortnite cards will be worth more than others. How valuable a trading card is can be determined based on desirability and aftermarket value. The trading card market experienced a correction in 2022, but cards are not dead.

Here are the most valuable cards that are going to be released in the Fornite Series 3 trading card set. This list of series 3 cards is in no specific order as all will be valuable.

Midas Crystal Shard cards from Fortnite Series 3 will resell for the most money and remain the most valuable card from the set. The card sells ungraded for anywhere between $350 and $500. Graded Midas cards can sell for over $1000 on eBay.

Midas cards check off all of the major boxes needed for a card to remain valuable. Midas is storyline character who is backed by a major streamer and the crystal shard card is extremely cool looking.

This card has already sold for high amounts and will continue to do so.

Frozen Red Knight is an extremely valuable card in Fortnight Series 3. It sells often and for a lot of money. Graded Frozen Red Knight cards have sold for more than $1000 in the past. Ungraded cards usually sell for around $150.

The Frozen Red Knight skin is an extremely popular one among fans and that’s why the card sells for so much and will continue to retain its value.

It’s almost on the level of Midas, but not quite.

The Elite Agent Cracked Ice Epic Outfit card is something collectors brag about because it was released in 2018 only for a few days and never returned. Therefore, the collectors who were able to obtain these cards praise it at a high value.

The card resells for around $100 ungraded right now. These sales have been high in the past and are consistent on eBay.

The Frozen Fish Stick Cracked Ice card is a card that sells often and for a lot of money. It usually sells for more than $100 ungraded. If this card is graded with a high grade it can sell for more than $450.

The reason for this is because Frozen Fishstick is an extremely popular skin in Series 3. The all-blue card is aesthetically pleasing and it’s just a really cool card to have in general.

Cracked Ice Skull Trooper Inverted card is another one that’s valued high because it’s such a classic card. It’s seen some major sales and is a very recognizable card among collectors and hobbyists.

While this card has dropped in value a bit in 2022, sales still remain steady.

Galaxia is a sleeper card on this list because it doesn’t sell for much money yet. Sales remain steady for ungraded cards between $30 and $60.

But the overall look of this card is extremely cool because Galaxia’s skin is cool in general. As long as sale volume remains consistent, this card will continue to be wanted by collectors and will eventually start to go up in value.

Agent Peely is a great long-term investment for Fortnite Series 3 because the character will remain relevant and wanted. Some consider it the Pikachu of Fortnite.

Unpeely is similar to Agent Peely, except at a lower value. You’ll see similar sales volume and numbers, but it won’t ever sell as high as Agent Peely.

Still, Unpeely is one of the most popular cards of Series 3.

Aura wasn’t as prominent in season 2, but quickly became a favorite during season 3. This series 3 Fortnite card is a higher-selling one. Ungraded it sells for about $100, but a good grade can boost this card up to a $500 card.

The Series 3 Fortnite cards listed above will definitely continue to rise in value as long as they remain popular.