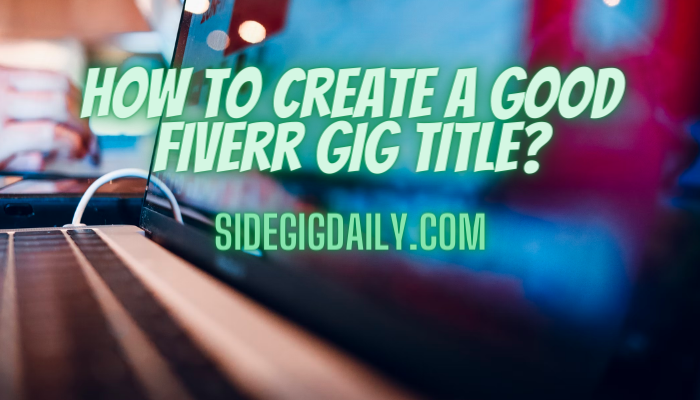 The right Fiverr gig title will cause your gig to stand out from the rest and rank high in search results. These two factors will drive more clicks and sales to your page so you can earn more money.

Gig titles on Fiverr are extremely important in driving sales, especially if you’re new to the platform.

Follow these tips to create a good Fiverr gig title and start driving more sales to your page.

Use keywords in your Fiverr gig title

Every good Fiverr gig title contains keywords associated with what the gig is about. Most are stuffed with keywords.

Keywords basically pinpoint what your gig is about and hopefully will match up with what users are searching for. The more keywords in your gig title that align with a user’s search query, the higher your gig will rank on Fiverr.

For example, if you type in ‘book cover design’ on Fiverr, the top eight search results all contain keywords that correlate with those three words.

As you can see in the screenshot above, every search result contains the three keywords that were searched for. However, they also contain additional related keywords.

In this case, the related keywords to ‘book cover design’ are:

These are all great related keywords these Fiverr gig workers are stuffing into their titles to rank higher on search queries.

In my opinion, oliviaprodesign is the best cover designer on Fiverr, but her gigs don’t even rank in the top results because her gig titles aren’t as optimized.

Focus your Fiverr gig title around a niche

In the previous example, we saw the top cover designers use words like ‘professional’ covers or ‘modern’ covers. Those aren’t just related keywords, they are also niche cover design styles. By including them in their Fiverr title, it helps them rank higher on Fiverr.

Adding a niche to your Fiverr title helps two-fold: It functions as a related keyword and also helps pinpoint specific search results. In the screenshot above, the gig worker hubspot_pro appears twice in the first row of search results. It’s because their gigs line up for the keywords that were searched in two different ways.

Use a double-niche in your gig title on Fiverr

Experiment with your gig title

Trial-and-error is the only way you’ll truly create a great Fiverr gig title. You have to keep trying different titles and methods until you get something that works. Then you can innovate on that to hopefully obtain more success.

The best way to experiment with your gig titles on Fiverr is just by creating several different gigs and seeing which work and which don’t. Innovate on the good ones and scrap the bad ones.

Competition on Fiverr can be extremely fierce, so it’s important to have a gig title that stands out from the rest and ranks high on search queries.

Fiverr can act as a great side hustle for selling services if you know how to use it.

Play around with your Fiverr titles to see what works for you. Eventually, you’ll land on titles that rank high for the services you provide.