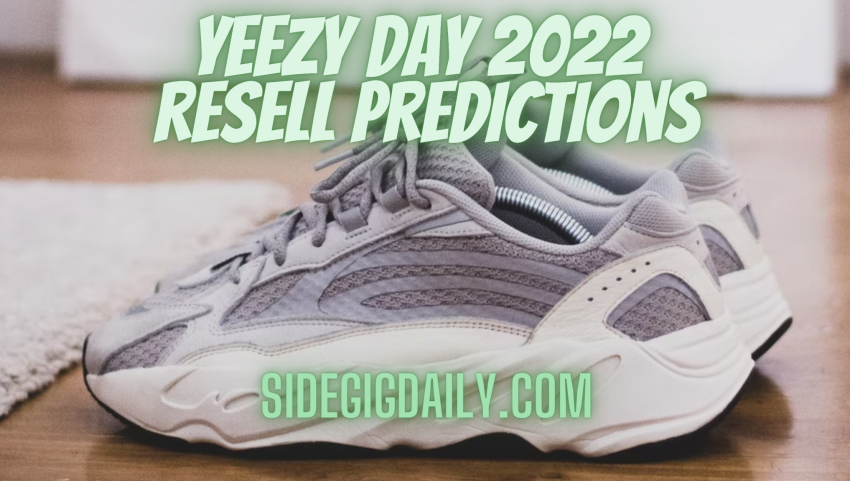 Yeezy Day is a two-day marathon of Adidas Yeezy sneaker releases that flow one after the next. It gives buyers and resellers a chance to snag Yeezys they missed out on throughout the last few years.

Since most－if not every－sneaker released on Yeezy Day has already been released before, resell markets can take quite the hit. Some hyped pairs and colorways don’t dip in value at all while others completely plummet.

Based on information from prior years and what we know about the market today, we can predict which pairs of Yeezys will resell for the most money on Yeezy Day and which won’t. We will be using price trends on StockX to get a more accurate prediction.

This can be a major help for sneaker resellers with limited funds and have to only focus on a few pairs. Going after the most profitable pair is going to be your main objective.

Disclaimer: This is a sneaker resell prediction. No one can foresee the future, but using current market data and trends, these predictions were calculated. Please take caution and follow them at your own risk.

Adidas Yeezy sneakers are one of the most profitable sneaker brands to resell, so a day full of releases can be very profitable for sneaker resellers.

Let’s break down all of the releases on Yeezy Day one day at a time.

The Azael adidas Yeezy 700 V3 sneakers are projected to release on August 2 of Yeezy Day. This is a great sneaker to go after if you’re a reseller because the price chart on StockX has it reselling for double its retail value of $200.

Notice it’s starting to trend downward toward May and June of 2022. That’s because resellers know Yeezy Day is approaching, more pairs will be on the market and prices will go down. So they are selling off inventory before Yeezy Day 2022.

Keep that in mind for all of the sneakers on this list.

The ‘Analog’ Yeezy Boost 700s are also releasing on the first day of Yeezy Day 2022. They are not a pair for new resellers to go after because their retail price is $300 and only resell between $400 and $450.

The retail price for this sneaker is too high to justify holding it until it returns to $500 or trying to quick flip it after it releases on Yeezy Day.

The ‘Utility Black’ adidas Yeezy 450 is getting its initial release on Aug. 2, 2022, the first day of Yeezy Day 2022. These will likely be extremely limited and extremely sought after.

Since these are a brand new Yeezy release, there is no pricing data on StockX to go after. But you should definitely buy these if you get the chance as resell prices will be through the roof after they drop.

Yeezy 450 models tend to be extremely limited and all-black Yeezys always perform well on the aftermarket. If you can get bae sizes or adult pairs, go for it. Both will resell for good money.

Another brand new release coming on the first day of Yeezy Day 2022 are the ‘Flax’ Yeezy Slides. Resell predictions are high for these slides as all Yeezy Slides do well on the aftermarket.

If you can get your hands on a pair of the Flax Yeezy Slides to resell, go for it. You could quickly double or even triple your investment.

Since these are a new release, there is no resell data on StockX at this time.

The last release on day one of Yeezy Day 2022 is the ‘Turtle Dove’ adidas Yeezy Boost 350. Resell predictions are extremely high for this sneaker as it hasn’t released since 2015 and has been selling for around $2,000 since that release.

The Turtle Dove will be the most anticipated release on the first day of Yeezy Day 2022 because of the hype behind it. Resellers and collectors both love this model of sneaker and have been going crazy over it since it first released in 2015.

This sneaker will be extremely limited on Yeezy Day, but it’ll be more than worth your time and money if you go after it. You’ll be able to immediately resell it for much more than you paid.

Retail price for the Turtle Dove Adidas Yeezy Boost 350 is $200. If you resell the shoes quickly, you’ll likely sell them for $1,000. If you hold them for a year after they release, you could probably sell them then for $2,000 or more.

Starting off day two of Yeezy Day 2022 on August 3 are the Static Yeezy Boost 700 V2. Resell predictions for this sneaker are low because the retail price is $300 and they recently released earlier in 2022.

The Static adidas Yeezy Boost 700 V2 could make a great long-term Yeezy hold if you keep them headstock for a few years. But that money could be much better used on other sneakers coming out on Yeezy Day instead.

Unless you’re looking for a long-term investment, avoid buying and reselling the ‘Static’ adidas Yeezy Boost 700 V2 after Yeezy Day.

The ‘Hospital Blue’ Yeezy Boost 700 V2 will be releasing on day two of Yeezy Days and resell prediections are bad for this sneaker. Do not buy this shoe to resell it because it does not sell for much.

The retail price of these Hospital Blue Yeezys is $300. Factor in shipping and tax and you might be closer to $350. They have only been reselling for around $500 on StockX and will dip after they release on Yeezy Day 2022.

These Hospital Blue sneakers are definitely a shoe to avoid on Yeezy Day if you’re a reseller.

The adidas Yeezy Boost 700 ‘Hi-Res Blue’ is a new colorway that will be dropping on the second day of Yeezy Day 2022. Not much is known about this sneaker except that the colors are vibrant and resell prices will likely be high because it’s new.

Resell predictions for this Yeezy sneaker are tough to call, but sellers should likely go for it if they have the funds. New Yeezy colorways do well on the aftermarket, especially 700 models.

There is no price chart on StockX for the Hi-Res Blue adidas Yeezy Boost 700 because it’s a new model releasing on Aug. 3, 2022.

The ‘Tephra’ Yeezy Boost 700 V2 are releasing on day two of Yeezy Day 2022. Resell predictions are low for this sneaker for two reasons: They aren’t in high demand and retail price is $300. The average resell price for the Tephra Yeezys is only about $500.

Resellers should avoid the Tephra 700 V2 colorway as there are better sneakers to chase after on day two of Yeezy Day.

The ‘Super Moon Yellow’ Yeezy 500 sneakers are releasing on day two of Yeezy Day 2022. Resell predictions for this sneaker are extremely low. These Yeezys should be avoided at all costs on Yeezy Day and in general.

The average resell price for these Yeezy 500s is a little under $300. These Yeezys retail for $200. After you add in tax and shipping, you’re paying about $230 for a pair that will only return you $260 after fees. It’s not worth it.

Yeezy Day 2022 will have the ‘Sesame’ Adidas Yeezy Boost 350 V2 releasing on day two. The resell prediction for these Yeezys after Yeezy Day is about $400 to $450 on the aftermarket.

The Sesame 350 V2s have been around for a long time and every time they release, resell prices dip and then go back up. They are usually easier to obtain on Yeezy Day.

Resellers should go after the Sesame Yeezy 350 V2s on Yeezy Day and can potentially double their money. Don’t hold these Sesame Yeezys for too long because they won’t go up too much more in value.

‘Hyperspace’ Yeezy Boost 350 V2s are coming back on day two of Yeezy Day. They initially released in 2020 and resell prices are similar to the Sesame Yeezy 350 V2s. This means resellers should buy these if possible and resell them after Yeezy Day.

The average aftermarket price for these Hyperspace 350 V2s is $450. They retail for $220. Those are great margins to resell this Yeezy for a quick profit.

Don’t hold these Hyperspace Yeezys for the long-term because they won’t go up too much more in value over the next few years.

Rounding out day two of Yeezy Day 2022 is the ‘Core Black Red’ Yeezy Boost 350 V2. These are another extremely hyped, limited sneaker that will resell for a lot of money. Just like the Turtle Dove Yeezys on day one, resellers and collectors have been waiting years for these to re-release.

This 350 V2 checks all the boxes for a Yeezy and is one of the most popular Yeezys to after release. You can expect resell prices to be sky high for these Yeezys. They last released in 2016 and aftermarket prices have only trended upward since then.

The Core Black Red 350 V2 is an iconic Yeezy model and colorway. Don’t pass on these, buy them and resell them if you can. They will continue to trend upward in value long after Yeezy Day 2022 is over.

Yeezy Day 2022 will be a profitable day for sneaker resellers who know what pairs to go after. Certain pairs will continue to rise in value as these resell predictions state.